The second hand value does vary depending on specification however there is a distinct price difference looking on eBay between the LWB and SWB. The LWB versions are rarer to find.

I have had a lot of discussions with VW T5 and T6 owners when it comes to a SWB or LWB Transporter as there are pros and cons arguments for both.

A lot of VW owners overlook the LWB Transporter completely either because they don’t “look as Cool” or simply the extra cost!

I will attempt to clear up a few obvious questions such as “What is the difference between a SWB LWB Transporter” but also offer up a balanced argument for both models so that you can decide for your self which is right for you.

It is worth pointing out that accessories for the LWB and SWB are not always compatible. You will frequently find the accessory costs for the LWB are slightly dearer. Also things like van wraps or resprays will cost marginally more on the LWB models.

Things like pop tops, rails, awnings, exhausts etc. Have a browse on Amazon to see the comparatives to see how this may affect your decision.

Price difference between an SWB and LWB transporter

The price difference of a new VW T6 in identical trim shown in the comparison below shows that a new LWB will cost roughly £1,014 more

So the question we must ask our self is the extra 40cm worth the extra £1,000 but also what Pro’s or Cons does the LWB they bring?

Pros of a LWB Transporter

The obvious answer here is that you can carry items that are an extra 40cm in length however lets apply that 40cm to some real considerations for your transporter.

Therefore the extra 40cm obviously means we have a little more floor space to play with when it comes to the design of a camper van. Most commonly in the conversions that I have seen the extra 40cm in the LWB is used to provide space for a portaloo at the back of the vehicle  that otherwise would not have fit well between the Rock and Roll bed and the cupboards.

Cons of a LWB Transporter

The extra £1,000 from new is a con when you are already shelling out the best part of £30k+ for a standard transporter. Most people taking the option therefore will have a very clear idea that they need the extra space for something purposeful.

Performance is actually very marginal but to consider the facts below the LWB reduces MPG by 0.3mpg and increases the emissions by 1g/km. The speed however remains unaffected.

Difference in length between SWB and LWB Transporter

Excuse the poor pun, the extra length may suit those VW enthusiast with families. Some conversions that I have seen have an extra bed fitted width ways across the van which I guess would be suitable for a child or small adult!

I have also seen some conversions where the extra space is used as a “boot” that is separate from the rest of the transporter.

I quite like this idea as it keeps “clutter” to a minimum in the actual sleeping area and also means transportation of things that perhaps are a little too mucky for your nice living space a little bit easier. It also provides a secure area at the back of the van that is easily out of sight from the main compartment.

The LWB is actually quite a bit rarer than it’s SWB counterpart. I personally think it is down to the extra price from new that people do not want to fork out for however typically LWB seem to hold their value better and sell quicker second hand as there are less options out there for them.

The weight that the vehicle can carry is also an interesting one! Payload is important to some especially if you are carrying around heavy items. In other words what we are basically saying is that the LWB has a lower Max gross weight by 200kg despite the extra room.

Above all which makes it even worse, the driver plus vehicle weight is 64KG greater which ultimately means the LWB can carry 264kg less than the SWB.

The manoeuvrability is also worth considering. The turning circle on the LWB is 13200mm vs 11900mm on the SWB (again based on a 2.0 T28 TDI panel van) as well as parking needing the extra 40cm room.

Above we have a few facts and figures that can help you to decide for yourselves. Therefore the conclusion I have made for myself personally is that for a campervan conversion for those with family or needing extra storage space then the LWB is probably the better option for you.

Campervan conversions generally are not that heavy so unless you are using your van for trade purposes it is unlikely that the loss of payload will really be of a concern to you.

If on the other hand there is just you and perhaps one other that will use the van as a campervan then you probably wouldn’t be too concerned about having the extra room so the higher purchase price and slightly higher running costs would likely mean a SWB is a better fit for you.

As with most debates it comes down to personal preference. I would be keen to hear your thoughts on the topic especially if you think I have overlooked any keys points! 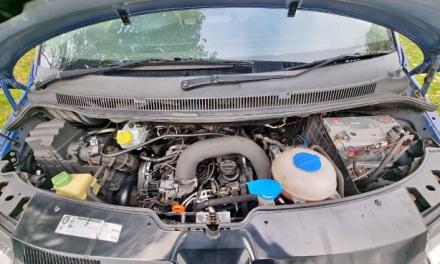